Other editions, reprints, and translations


• "On the credits page, acknowledgment is made to several publications for granting reprinting rights. The two most frequent sources for reprints were "Negro Digest" and "Liberator". The majority of the other acknowledged reprints are from Black publications as well" (Rambsy 2004: 183).
• "At the end of this anthology of recent black American poetry, fiction, drama and non-fiction (essays), the editors give bio-bibliographical sketches (pp. 657-670) of the numerous young writers of the New Black Aesthetic. Some of them are not published elsewhere" (Rowell 1972: 39).

● The back cover of the 2007 Black Classic edition of this anthology tells us that, "While many texts are readily available chronicling the Black Power Movement, the same cannot be said for its 'aesthetic and spiritual sister,' the Black Arts Movement. "Black Fire: An Anthology of Afro-American Writing" is a rare exception that documents and captures the social and cultural turmoil of the period."
● This sense of the uniqueness of "Black Fire" might be contrasted with Howard Rambsy's argument that the Black Arts Movement acquired public definition through the plethora of anthologies presenting the black writing of the period: writing on "The Golden Age of Anthologies featuring Poetry" on his "Cultural Front" blog (see link below), Rambsy states: "Between 1968 and 1975 . . . , more than 60 anthologies featuring black poetry appeared in print. The publication of so many anthologies during a relatively short period of time accentuated the idea that the Black Arts Movement was in fact a movement. Collectively, the anthologies helped display the idea of a united front among a large and diverse range of African American poets. The anthologies also assisted in establishing contemporary poets such as Nikki Giovanni, Sonia Sanchez, and Haki Madhubuti as central figures. . . . The anthologies established or solidified tribute and historical poems as well as poems about black music as central types of African American poetry. Because of their influential authority in designating literary value and keeping a select group of poems and poets in print, the anthologies operated as important forces in the formation of a canon of black poetry. Never before and in no years since have so many anthologies featuring African American poetry appeared in print."
Cultural Front (blog)

Reviews and notices of anthology 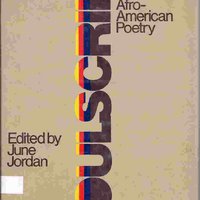